‘You don’t think you have a monopoly?’ Read Sen. Graham’s delightful grilling of Zuckerberg

Today’s testimony by Mark Zuckerberg in front of a Senate joint committee was often boring or redundant with previous statements. But there was an exchange near the two-hour mark that was pleasantly refreshing: Senator Lindsey Graham (R-SC) doggedly pursuing a common-sense answer from Zuckerberg on the question of whether it had any real competition.

Graham doesn’t let Zuckerberg employ his spin on the admittedly complex question of what Facebook’s competitors are. Demanding a simpler answer by employing a folksy car-buying metaphor, he makes it clear that at least from one perspective, Facebook is more or less without a real competitor — with the possible exception of Instagram, which it of course opted to buy for a fortune rather than allow it to exist as a credible rival.

The Senator also makes it clear that he doesn’t think Facebook should be allowed to self-regulate — but his invitation to Zuckerberg to collaborate on rules sure sounds like he wants the company to have a say in how it should or should not be bound by law. 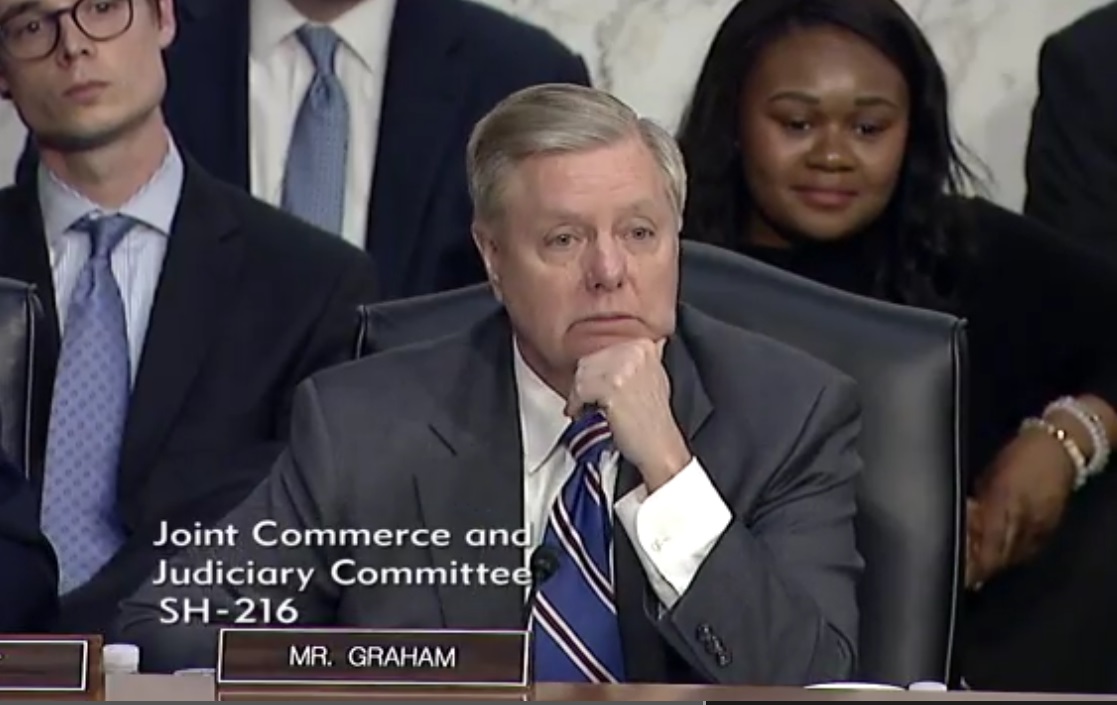 I’ve transcribed the exchange below:

Graham: Who’s your biggest competitor?
Zuckerberg: Senator, we have a lot of competitors.
Graham: Who’s your biggest?
Zuckerberg: Mmm… I think the categories of… do you want just one? I’m not sure I can give one. But can I give a bunch?
Graham: Mmhm.
Zuckerberg: So there are three categories I would focus on. One are [sic] the other tech platforms, so Google, Apple, Amazon, Microsoft, we overlap with them in different ways.
Graham: Do they do, do they provide the same service that you provide?
Zuckerberg: Um, in different ways, different parts of it yes.
Graham: Let me put it this way. If I buy a Ford and it doesn’t work well and I don’t like it, I can buy a Chevy. If I’m upset with Facebook, what’s the equivalent product that I can go sign up for?
Zuckerberg: Ah well, the second category that I was going to talk about was…
Graham: I’m not talking about categories. I’m talking about is there real competition you face. Because car companies face a lot of competition. If they make a defective car, it gets out in the world, people stop buying that car, they buy another one. Is there an alternative to Facebook in the private sector?
Zuckerberg: Yes Senator, the average American uses 8 different apps…
Graham: OK.
Zuckerberg: …to communicate with their friends and stay in touch with people, ranging from text to email.
Graham: OK, which is the same service that you provide.
Zuckerberg: Well, we provide a number of different services.
Graham: Is Twitter the same as what you do?
Zuckerberg: It overlaps with a portion of what we do.
Graham: You don’t think you have a monopoly?
Zuckerberg: (long pause) Ah, it certainly doesn’t feel like that to me! (laughter)
Graham: OK, so it doesn’t. So, Instagram. You bought Instagram. Why did you buy Instagram?
Zuckerberg: Because they were very talented app developers who were making good use of our platform and understood our values.
Graham: It was a good business decision. My point is that one way to regulate a company is through competition, through government regulation. Here’s the question that all of us got to answer. What do we tell our constituents, given what’s happened here, why we should let you self-regulate? What would you tell people in South Carolina, that given all the things we’ve just discovered here, it’s a good idea for us to rely on you to regulate your own business practices?
Zuckerberg: Well Senator, my position is not that there should be no regulation. I think the internet is increasing in…
Graham: Mmkay. You’d embrace regulation?
Zuckerberg: I think the real question as the internet becomes more important in people’s lives, is what is the right regulation, not whether there should be regulation.
Graham: But you as a company welcome regulation?
Zuckerberg: I think if it’s the right regulation then yes.
Graham: Do you think the Europeans have it right?
Zuckerberg: Ah, I think that they get… things right.
Graham: Have you ever submitted… (laughter) That’s true. So would you work with us in terms of what regulations you think are necessary in your industry?
Zuckerberg: Absolutely.
Graham: OK, would you submit to us and propose regulations?
Zuckerberg: Yes and I’ll have my team follow up with you so that way we can have this discussion across the different categories where I think this discussion needs to happen.
Graham: Looking forward to it.

While it’s admittedly not the toughest questioning, it does baldly address the simple idea that Graham and others consider Facebook effectively a monopoly and intend to craft regulations or legislation to remedy what they perceive as a regulatory gap.