Target has begun to test a new loyalty program, “Target Red,” that combines discounts on delivery with cash back on later purchases. The program will serve as an alternative to the existing REDcard program which requires customers to sign up for a Target credit or debit card. With Target Red, customers instead earn 1 percent back on purchases that they can redeem on their next visit, as well as receive 50 percent off a Shipt membership, and free next-day delivery through Target Restock.

The retailer had acquired same-day delivery service Shipt in December for $550 million, and has continued to operate it as usual, after adding Target to the list of available stores, of course. It’s also now helping to push customers who were shopping rival grocers on Shipt over to Target by pricing its own items the same as they are on the Target website, while others remain marked up.

Meanwhile, Target Restock is the retailer’s own entry in next-day delivery, which allows consumers to fill a box with everyday essentials – like household goods and pantry staples – and take delivery for $4.99 per box. (For comparison, Prime Pantry is now $7.99 per order, unless paying a $4.99 per month membership, which makes order over $40 ship free.)

However, Target Restock is only available in select metros at this time – following an expansion last fall, it now reaches over 70 million people, Target said.

Target Red loyalty program members will be able to waive that $5 delivery fee on Restock, and can take half off the cost of the typically $99 per year Shipt membership, too.

More importantly, perhaps, is the one percent back, as a way to lure in shoppers who won’t sign up for REDcard.

Target REDcard is already quite popular – as of the company’s latest earnings, it accounts for 24 percent of sales, with 12.7 percent from Target Debit Card, and 11.4 percent from Target Credit cards. But those figures aren’t climbing much these days. That’s where Red comes in. 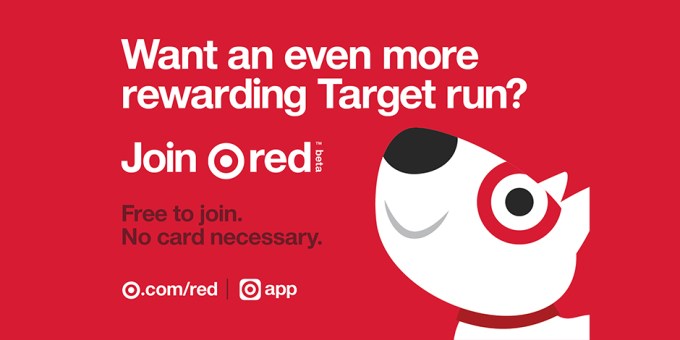 “When developing Target Red, we went straight to our guests to better understand what would be most meaningful to them in a loyalty program,” said Rick Gomez, executive vice president and chief marketing officer, Target.

And what they wanted was a loyalty program without a payment card attached. They wanted something more along the lines of traditional loyalty – that is, being rewarded for shopping at Target.

Of course, Target tried rewarded loyalty before. In 2016, it launched “Cartwheel Perks,” where purchases turned into points that could be redeemed towards specific items. But the program may not have been as well-received as Target liked because of the complexity. The test ended last year, with Target promising something better was in the works.

A straight cash-back option is arguably much simpler.

Another interesting twist to Target Red – and one that likely appeals to millennial shoppers in particular – is the part where program members can direct Target’s charitable giving in their local community.

The test of Target Red is taking place in the Dallas-Fort Worth area for now, so members will be able to vote for local organizations who should receive Target’s community giving funds, in addition to redeeming rewards online and in stores through the Wallet in Target’s mobile app, which previously only worked with REDcard.

While largely billed as an alternative to REDcard, Target will allow REDcard members to join Target Red if they choose. They can’t stack the 1 percent back with their existing 5 percent discount, but they can use the other perks, the company says.

The addition of Red also comes at a time when Target, like all retailers, is trying to figure out its place in a market where Amazon is dominating e-commerce. With Amazon Prime, customers can take free 2-day delivery, fill pantry boxes, shop for groceries through Prime Now (including Whole Foods) or AmazonFresh, shop cashier-less convenience stores in select urban markets, and enjoy a host of other perks. Amazon also has a variety of payment products, like cashback cards, and even discounts for EBT shoppers.

Walmart has followed suit with free 2-day shipping without a membership, EBT support for online grocery orders, curbside grocery pickup and delivery (the latter of which is now expanding), hefty ship-to-store discounts, free shipping from Sam’s Club and its integration with Instacart, and more.

Target, then, needed to come up with a loyalty program of its own that will not just increase foot traffic (as the 1 percent back on a later purchase does), but also ties into Target’s newer e-commerce efforts, like Shipt and Restock.

Target did not confirm when the Target Red test would expand beyond Dallas-Fort Worth.