Microsoft’s Twitch competitor, Mixer, is giving streamers a new way to customize their channels. The company has entered into a partnership with Lightstream Studio to allow Mixer streamers to add images, overlays, transitions, and text to their streams, or to switch between scenes. The goal is to make it easier for creators to give their streams a more professional look-and-feel, without requiring they have a lot of technical expertise.

For instance, gamers can use the Studio to create status screens like “Starting Soon,” or “Be Right Back,” then quickly rotate through them, as needed.

Streamers can direct their streams to Lightstream Studio from their mobile devices, PC, or their Xbox native broadcast.

Y'all wanted overlays on your native Xbox streams? Boom! Here it is!

Excited to roll this out today and to note you can point your stream from mobile, PC (PS4/Switch with cap card), or your Xbox native broadcast to Lightstream services for seamless overlays and scenes! https://t.co/Bq0a3yWczg

The support for native Xbox streams is what’s got streamers most excited, however.

Microsoft says the integration will not impact the other third-party services Mixer streamers today use for alerts, like StreamLabs, StreamJar or Tipeeestream, as they can link those accounts within their Lightstream settings. 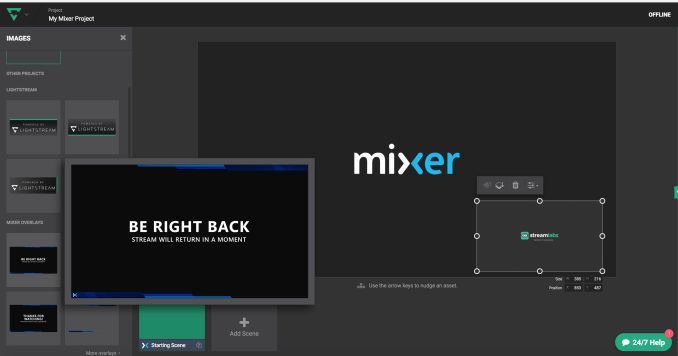 Microsoft has been rolling out a number of new features for Mixer in recent months, in an effort to bring its service more on par with Amazon-owned Twitch, the leader in game streaming in terms of both concurrent streamers and viewers, as well as rival YouTube Gaming.

This year, for example, Mixer introduced game sales as another means of helping streamers generate revenue from their channels, and it announced support for direct tipping. Many of these features are about Mixer playing catch-up, though, rather than coming out with something new.

Adding overlaid content to a stream to make it look more polished and professional is something that Twitch today supports through its extensions platform. It currently has over 150 different extensions, including things like stream schedules, countdowns, reminders, polls, and more. And some portion of those extensions became available on mobile just last month.

Lightstream Studio is not quite the same, as it a partnership with a third-party rather than a built-in offering, but it will give streamers some similar options thanks to its support of third-party tools for adding stream alerts.

Lightstream Studio is first being offered in beta to Partners and Pro users to test, before rolling out more broadly.